This is the part of your body they probably didn't tell you about in anatomy class. The endocannabinoid system is a vast network of chemical compounds and receptors that exist naturally in the body and serve the purpose of maintaining homeostasis.

Though not discovered until the late 1980’s by Dr. Raphael Mechoulam, the endocannabinoid system (ECS) has always been a necessary part of maintaining optimal health. We now know that all mammals, including dogs and cats have an ECS.

Homeostasis refers to any process or reaction that the body utilizes to actively maintain a constant internal environment despite external factors. This includes regulation of normal functions such as:

If homeostasis was to fail the body would not be able to survive through simple tasks we take for granted such as a moderate cardio workout, dietary inconsistencies or even just a hot day without air conditioning.

There are three components that make up the ESC. They work together to regulate the system and restore mental and physical balance as needed.

These receptors sit on the surface of cells and evaluate conditions outside the cell. They then transmit information about changing conditions to the inside of the cell, invoking appropriate responses at the cellular level. The two main cannabinoid receptors are CB1 and CB2. Although they have similar properties, one of the biggest differences is the tissue and organs in which they reside.

The term “endo” refers to the concept of existing internally. The body naturally produces its own molecules to interact with the ECS. These molecules bind to activate naturally occurring cannabinoid receptors. The two most prominent endocannabinoids are anandamide and 2-AG.

Endocannabinoids are made of fat-like molecules within cell membranes and can be synthesized on demand. Therefore, they are created as needed rather than created and stored for future use. 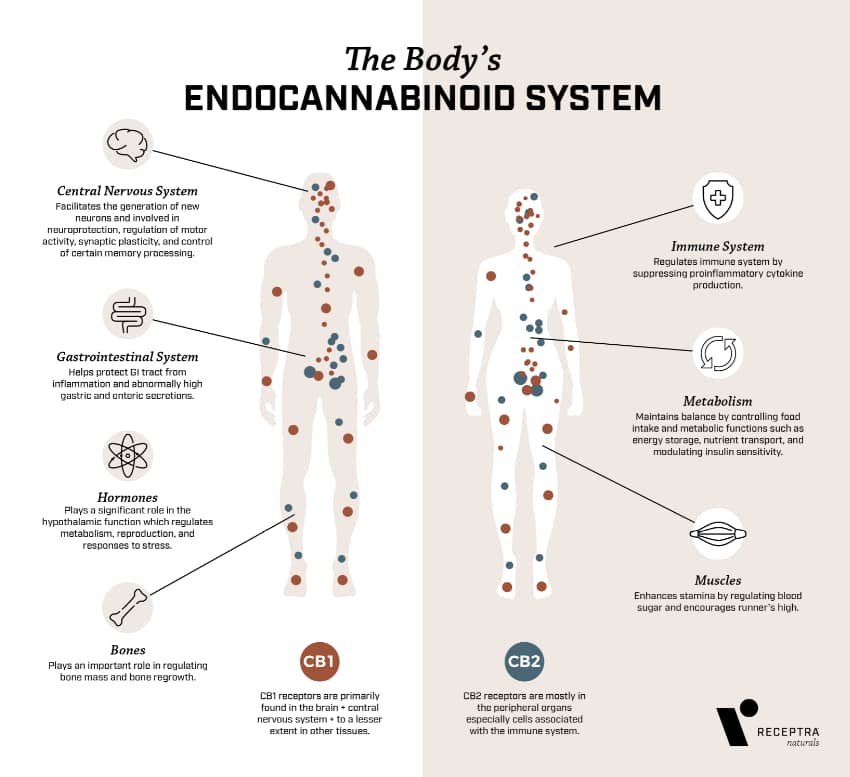 The Endocannabinoid System and Homeostasis

The ECS works to stabilize the internal balance of the body according to the signals received by the brain. Neurons are highly specialized cells in the brain. They communicate through the release of neurotransmitters. Neurons will only respond to communications if they have the specific receptor required to receive the neurotransmitter.

Once an imbalance is detected, the body naturally synthesizes endocannabinoids to interact with necessary receptors depending on the issue. This communication stimulates a chemical response with the purpose of restoring homeostasis.

Plant Cannabinoids and the Endocannabinoid System

Cannabinoids that are present in the cannabis plants are referred to as "phytocannabinoids." Full-spectrum CBD hemp oil like Receptra Naturals is made from pure hemp extract and contains naturally occurring compounds such as essential vitamins, terpenes, minerals, nutrients and cannabinoids that all work together with the ECS.

Since the body produces its own set of internal cannabinoids, it would be reasonable to wonder why people do not constantly experience the effects of cannabis without external stimulation.

Endocannabinoids have a very specific response to changes in the body's internal balance. Responses are fairly consistent yet limited. Phytocannabinoids such as CBD, THC, CBN as well as other molecules and neurotransmitters typically interact with multiple receptor types. Differences in interactions with various receptors can produce distinct effects.

Unlike other cannabinoids, CBD does not interact directly with CB1 and CB2 receptors. CBD has the ability to indirectly affect the endocannabinoid system by blocking enzymes that reduce natural cannabinoid molecules. It also has the ability to impact opioid, dopamine and other receptors that could improve the way modern medicine copes with psychological health concerns.

Unlike THC, CBD does not have an intoxicating effect. This could be because of its lack of direct interaction with cannabinoid receptors.

There has been an increasing amount of research dedicated to a deeper understanding of the endocannabinoid system. Just as the principles of homeostasis assert, balance is crucial for optimal health. This is also relevant to the ECS. Just as any other compound can be deficient in the body, scientists are beginning comprehend how a balance of cannabinoids affects the body as a whole.

Click HERE to learn more about what it feels like to supplement your endocannabinoid system with pure full spectrum CBD oil or feel free to contact the Receptra Customer Service Team with any questions.