Receptra Naturals CEO Jim Scott watches his sons as they make their way, early in the morning, onto the frozen pond just a stone's throw away from their home in Colorado. He then laces up his skates to join them. Hockey has always been a normal part of life for Jim and his family, and it now serves as a way for them to stay active together.

“It's hard to describe all that hockey has given me,” said Jim. "But those in the sport understand that it's a lot.

From his days as a Minnesota high school hockey player at Hill Murray and walk-on at Boston University, Jim has always had a love for the game. Now a youth coach in Colorado, he’s proud to could pass that passion on to his kids and others in his community. In what seems to be a year-round routine now, Jim runs his kids back and forth to school and practice while also getting his own playing time in with the travel team he plays on in Colorado. 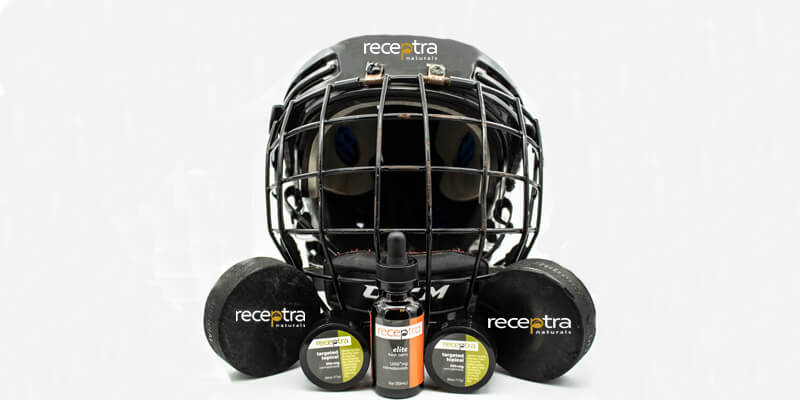 In a generation where so many parents become easily disconnected from their kids, the time on the ice is something that he can share with them. No phones, no video games, just skates, sticks, a puck and a passion for the game. There are a lot of life lessons to be learned on and off the ice.

“Hockey players understand the importance of team above self in a successful organization. You rarely hear a hockey player talk about their accomplishments even at the professional level. It is always about the team,” said Jim. “Everything is a team effort. Those are the same type of qualifications I’ve looked for in the Receptra Naturals team.”

Jim Scott is not the only Receptra team member actively involved in the sport. CFO Robert (Bobby) Collier is not only passionate about the game, but he is also heavily involved with the Colorado Ice Hockey Referee Association. Bobby has been playing since he was six years old and now has two teenage boys who play.

“It is a life sport. Once you play you never give it up,” said Bobby.

Steve Nilsen works on the lifestyle marketing and branding side of things and has stepped in as the type of team player Jim Scott would have chosen both on and off the ice. In fact, Jim and Steve played against each other in high school. Steve is an Edina, Minnesota native who went on to play at Hamline University. Decades later, with a haggard knee that needs to be replaced, and twin boys of his own that he coaches, Steve still plays just as much as he ever did.

“My kids love it, but wow, it’s a lot more competitive at a young age than it used to be. I started playing at five years old and I still play. Kids these days are just so much bigger, faster and stronger,” said Steve. “The training is more intense too. The average age in the NHL is like 23. I’m just happy to still be playing.”

CBD Is an Ice Hockey Necessity

Jim, Bobby, and Steve didn’t join the Receptra team specifically to advocate for CBD in ice hockey. The connection happened organically but similarly for each. The general story is that they went out and played a game, came back home and felt a little stiffer and achier than they would like to. The light bulb came on and they remembered that they had Receptra Targeted Topical. Now all three apply the CBD topical before and after games to continue to achieve optimal performance on and off the ice.

Current and former players at all levels are recognizing the benefits of CBD in ice hockey. The recovery-promoting properties of CBD can have a powerful impact on a player’s career longevity. Whether you are playing in the big leagues or a neighborhood pond, ice hockey is not for the meek.

“Stuff hurts. When you have been playing any contact sport for as long as I have, you are going to have aches and pains. It’s just a fact and it is different for everyone,” said Jim. “ It may be a knee or a shoulder, or a little bit of everything for that matter. I use Receptra’s Targeted Topical and so do a lot of the guys on my team. It’s kinda like passing around a case of beer after a game, except we pass around the Topical.”

And then, there came the moment of realization . . . With three hockey players on the Receptra team, all sharing Recepta products organically with their teammates and all seeing results, it started to click that CBD could make a real impact in the sport.

Receptra CBD was benefiting their athletic performance on the ice through increased mobility, focus and less discomfort. This was also true for the teammates they had shared the products with. Hockey and CBD were practically made for each other! It was this epiphany that inspired the company to focus on their involvement with ice hockey.

“At Receptra, hockey is in our culture and in our blood. Three members of our leadership team played high-level hockey 25 years ago, including two who played for their high school in Minnesota, and continue to play beer league today,” said Jim. “We coach our kids. We appreciate all that the sport has given us and are proud that it's a part of us.”

Wasting no time, the Receptra Team has jumped on board to sponsor several major events in 2019 starting with the 2019 U.S. Pond Hockey Championships which will be held January 24 - 27 at Lake Nokomis in Minneapolis, Minnesota. In addition to the Championships, Receptra is also sponsoring the 9280 Pond Hockey Tournament, to be held January 25 - 27 at Keystone Lake in Keystone, Colorado. The company will be providing samples to players and fans throughout the events so that they can experience the benefits of CBD first-hand.

“As most other athletes know, an active lifestyle ultimately takes its toll on the body. All of us current and former athletes at Receptra have something on our body that has paid the price - knees, shoulders, hips, ankles, wrists, etc. Something hurts or it takes much longer to recover than before,” said Jim. “We use our own products every day to give us relief and specifically sponsored these tournaments to share these great, effective and natural products with our community - the hockey world. It's our hope that they benefit from them as much as we have.”