In our previous discussion with Nate Quarry, the former UFC fighter talked about his unorthodox journey from a sheltered childhood, to standing under the bright lights in the Octagon. That journey has not been without pain and sacrifice, both mental and physical. Quarry fought in a time when the sport of MMA was still in its growing phases and ego rained supreme. His body has paid some of the price for his success and his amazing story of perseverance. But the fighter has recently discovered new ways to combat the pain and achieve a higher quality of life.

You have had an amazing career but I’m sure there were bumps and bruises along the way. How are you dealing with those now?

"I had so much damage done to my body. When I started at Straight Blast Gym, Matt Thornton was the head coach. He was a gym superstar, which means he never stepped his foot into the cage. His goal was to beat the shit out of all his students. He never quite got over that.

All of the wrestlers were used to training hard all the time, but you can’t do that in boxing or MMA. You just take too much damage. I remember training with Dan Henderson and getting suplexed over and over. Randy Couture was yelling at me to not give up the underhook, but by that point, I had no idea what was happening. I looked at him and said, ‘I don’t understand any of the words you are telling me.’ He said we would work on it later, and then we went back at it. 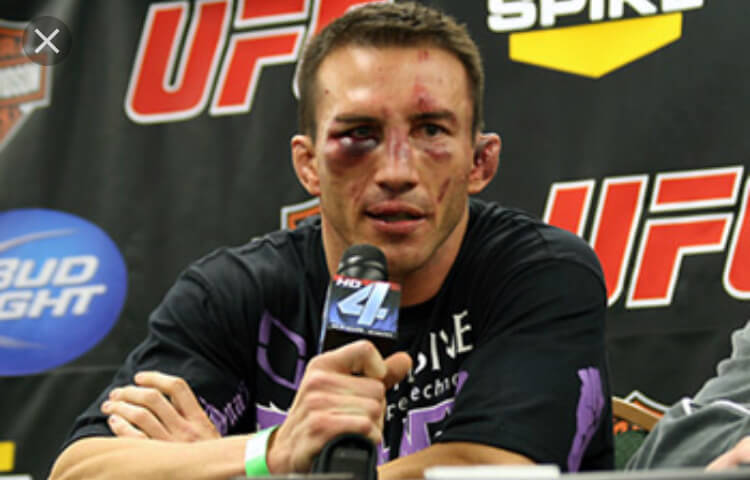 Aside from moving your head out of the way, did you ever make a conscious effort to minimize injuries?

"I took so many beatings back in those days. The Nevada State Boxing Commission had a book on boxing safety, which I read. It said that most boxers only sparred once a week and that they worked a lot on footwork, jumping rope and those things. There are only so many punches you can take. I went out and bought big 20-ounce sparring gloves hoping to set an example that we should take care of our partners. Everyone else just kept wearing bag gloves or 8, 10 maybe 12-ounce gloves for sparring.

What kind of damage did you take during actual competition?

"I remember fighting Mike Whitehead and that was a crazy fight. The fight was supposed to be one fifteen minute round with a five minute overtime. The referee, judges and timekeeper were all pulled from the crowd. They were people who paid for tickets to see the show. The promoter didn’t plan very well. Well, the timekeeper bumped the clock when the fight started, so we fought for 22 minutes straight and then had the five minute overtime. The ref was bad. At one point I knocked Mike out and he was falling out of the ring. I didn’t realize he was out so I grabbed him to bring him back in and grabbed the ring to do it. The ref yelled at me for grabbing the ring. I hit Mike again and he woke back up. We kept fighting.

At the end of the fight, I walked over to my coach and said ‘I just proved that I will fight until I have nothing left. I don’t have to prove it anymore.’

Did training get any better after that brutal fight?

"Six days later we are in the gym and I was at the end of his (Thornton’s) jab. I have t-rex arms. He's about 6'8" and I'm around 6 foot flat. He’s giving it to me, so I hit him with an overhand in my big gloves and pushed him into the cage. Then he says to me, ‘You know what your problem is? You are no good and I knew you never would be. I’m just using you to make me better.”

I wish I would have known that years ago. Two weeks later I was training with Robert Follis, who recently passed. Matt Thornton calls me into his office and says that I’m a good training partner and I make him better and that I already had a lifetime membership so he wasn’t getting anything else out of me. I was completely over it. My advice to him was, ‘Don’t tell your students that you don’t care about them beyond their paycheck'.

Nate Quarry has had eight surgeries in his career including two back surgeries and reconstruction on his face.

"At one point I was training and Randy Couture caught me in an armbar. I went to hitchhike out and he straightens his back and tears my pec from the bone. It was so painful that I had an out of body experience. My fight career nearly ended before it began. Rober Follis was very supportive and told me that it was a freak thing and they would get me back to where I needed to be.

I took so much damage over the years. I have endless stories of injuries and concussions. We didn’t know any different and it was the battle of the egos. Now I go into a gym and I see that I say to myself ‘Man, I’m so glad I know I’m tough so I don’t have to prove it on a daily basis.

If I have a son or daughter that wants to fight I’m going to make sure that we don’t compete in the gym. This is not the battle. Let that ego go so you can become the best that you can. 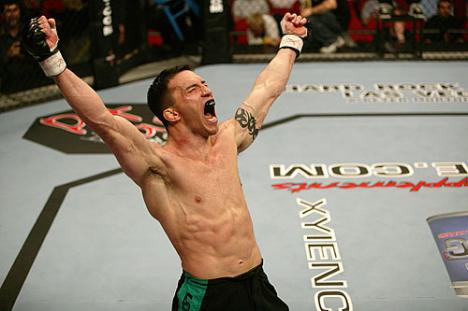 Would you encourage other athletes to try CBD oil?

"This is just black and white and I am not trying to push a product. Before I got my last bottle of Receptra I ran out and the opioid use went right back up. The Receptra came in and it went back down. I am 46 and need all the benefits of CBD oil.

I also have a lot to think about. My wife is 32 and wants kids. What is my future going to be like? My father died at 62. I want to be a big part of my kids' lives. I don’t want just be there for their graduations, I want to be there for their wedding and everything else. If I want to go grapple or go backpacking I was to be able to do that. I don’t want my life dictated by my past stupidity determining what I can and can’t do. 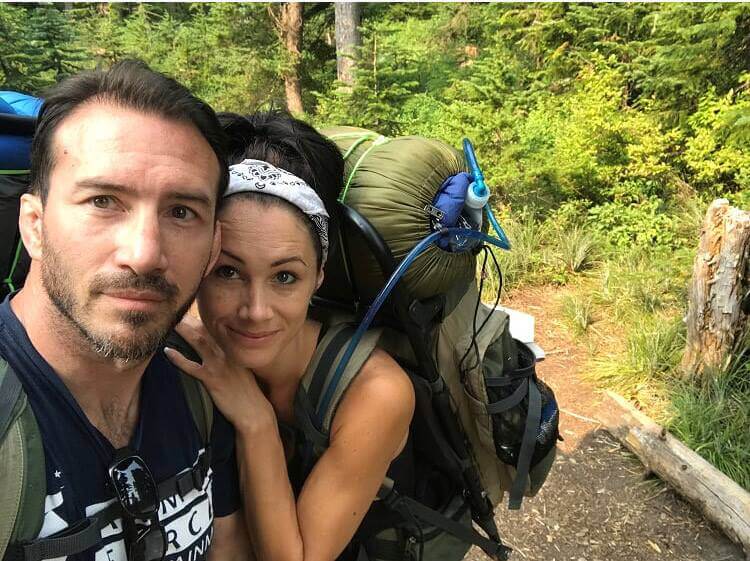 After exhibiting symptoms, Quarry was diagnosed with fibromyalgia in his early 20’s.

"My fascia is just a wreck. There is a process called grafting where they use a tool to scrap the skin and mine sounds like rice crispy treats. I can lay on a baseball or grab the Targeted Topical and it immediately releases the muscles and takes the pain away.

CBD is a compound derived from cannabis. It is patented by the U.S. government as both an antioxidant and neuroprotectant. It can be extracted from either marijuana or industrial hemp.

How did being raised as a Jehovah’s Witness impact your perception of cannabis?

"Being raised in the cult, it was not allowed at all. You can’t be Jehovah’s Witness even if you smoke cigarettes. My brother started smoking at 14 and that lead to a big fall out with my immediate family. He lost contact with all extended family. And harmed any future relationship.

I was told that marijuana was the worst thing ever. Look at where my brother is at. That’s devil’s weed! When I left the organization I was still a believer that cannabis was bad. Marijuana was a huge negative. I never a questioned that maybe my brother’s issues were because we grew up in an abusive household. I had horrible nightmares. But once you realize you have been manipulated you begin to wonder 'what else have I been lied to about?'.

I’m not going to get excited about someone else’s lifestyle as long as you are a good person and treat people kindly. I don’t think kids should smoke and I never smoked while fighting.

How were you introduced to cannabis?

"One day I was complaining about horrible sleep. A friend suggested I have a pot brownie. I declined but he convinced me it was a good idea. I took a bite and woke up 8 hours later.

After sleeping better than he had in years, Nate Quarry realized that maybe cannabis was not the evil substance he was raised to believe it was. He was not compelled to do anything harmful and his body did not have a negative response. This led him to question why it was illegal to begin with.

"I can have a glass of wine with dinner or have a couple of drinks at the bar. But isn’t alcohol the root of all evil? Isn’t marijuana the same thing?

I was watching Dr. Drew’s "Celebrity Rehab" and during the first couple of weeks they cut out whatever substance they were abusing and go through the detox. Then they go to do the real work to find out why the people can’t responsibly use those substances. Most of the time it is childhood trauma that is the root of the problem. It’s the instability of the people, not the drug that is the issue. I look at my brother. Was his problem really a gateway drug or was it abuse as a child that he never went to therapy for? 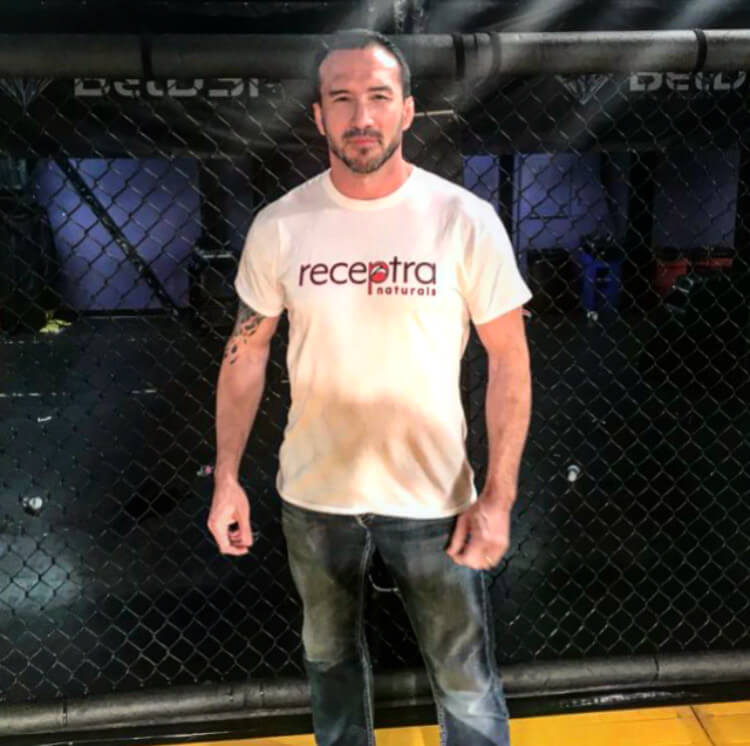 So your views on cannabis have changed drastically from childhood. Are you a frequent user?

"I’m not a wake-and-bake guy, but at the end of the day if I am at home why can’t I smoke and just relax? We are told to look at all the medical benefits for justification, but Budweiser isn’t doing that. Cigarettes and alcohol companies aren’t talking about that. We can make our own decision, except for this. Legalization was never even brought to a vote. People never voted on that.

If you smoke in your house at the end of the day they can send men to your house with guns. This is coming from largely the same people wanting the government to stay out of their business. If we are really going to be a free county why don’t we actually get to be free? I’ve seen damage from drugs and alcohol. So many continue to be legal and nobody bats an eye. The number of people who died under the influence of marijuana-related are a small fraction of alcohol-related incidences.

According to the Center for Drug Control and Prevention, nearly 88,000 alcohol-related deaths occur annually in the U.S. Nearly zero occur from marijuana.

"I didn’t want to be a conspiracy guy but that’s what the evidence leads to and I had to open my eyes. Jeff Sessions (U.S. Attorney General) says that good people don’t use marijuana. I’ve seen video of a child who was having seizures 24 hours a day stop after taking CBD. Is that child bad? What about people who drink alcohol? There’s a cognitive dissonance. I’m using my brain here and there is a manipulation of prohibition, the Nixon era, synthetic fibers, black panthers . . . there’s more to this picture than we have been told. All too often, people just need to be told.

Drug prohibition money is astounding. What a much better society. We spend fifty thousand dollars in punishment for violations rather than five thousand in treatment to make a better member of society. How does that make sense? It’s astounding.

Time has changed so much- we have no more state-run media  . . . in theory, but at least we have counters. When Jeff Sessions says horrible people smoke weed we can counter. It's time to look at what the real problem is instead of ramping up the drug war.