You have heard about CBD for pets, but is there any science to back it up? Does your pet’s body even use CBD? Here are the answers you have been waiting for.

Though it may sound unfamiliar, the endocannabinoid system, or ECS for short, plays an important role in supporting overall health and wellbeing. All vertebrates have an ECS that serves the purpose of helping the body establish and maintain balance for optimal health and wellness. This includes animals like the furry, fuzzy or feather ones we consider family. “Endo” means inside and “cannabinoids” are cannabis compounds. Simply, we have cannabinoids already inside of us that the body naturally produces.

CBD for Pets: The Endocannabinoid System

"It is clear that the endocannabinoid system is not just present in nearly all animals, but plays an integral role in maintaining homeostasis for a number of organ systems. The endocannabinoid system modulates the nervous and immune systems and other organ systems through a complex system of receptors and chemical signaling molecules to relieve pain and inflammation, modulate metabolism and neurologic function, promote healthy digestive processes, and support reproductive function and embryologic development." - Robert J. Silver, The Endocannabinoid System of Animals

Homeostasis is the term for any process or reaction that your pet’s body utilizes to actively maintain a constant internal environment despite external factors. This includes the regulation of normal functions such as:

If homeostasis was to fail your pet's body, they would not be able to survive through simple tasks we take for granted such as a moderate walk, chasing a ball on a string, dietary inconsistencies such as eating the scraps your child dropped on the floor, or even just a hot day without air conditioning. 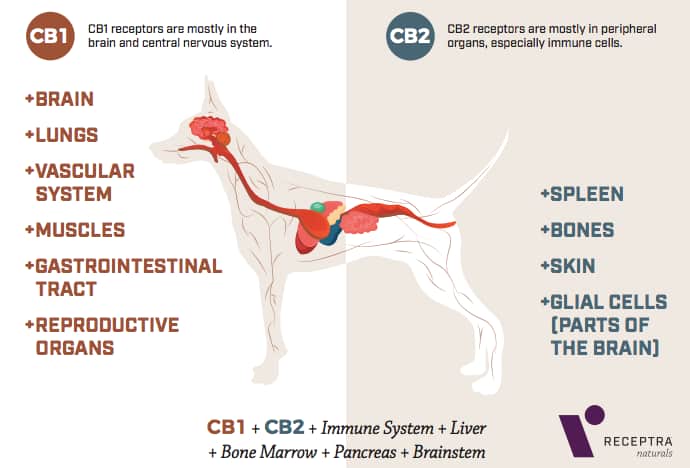 There are three primary components that make up the ESC. They work together to regulate the system and restore balance as needed.

Cannabinoid receptors sit on the surface of your pet’s cells and evaluate conditions outside the cell. They then communicate information about changing outside conditions to the inside of the cell, causing cells to respond appropriately. The two main receptors are CB1 and CB2.

CB1 receptors are abundant in the brain and central nervous system with some presence in the kidneys, liver, heart, lungs, muscle, bones and even fat.

CB2 receptors are primarily found in the immune system and blood cells but are also exist in the peripheral nervous system, gut, liver, muscles, skin and bones.

Your pet’s body naturally produces its own molecules to interact with the ECS. These molecules are called endocannabinoids and bind to activate cannabinoid receptors. The two most prominent endocannabinoids are anandamide and 2-AG. Both may play a role in reducing pain and keeping your pet in good spirits, even in scary situations. CBD can help promote the function of endocannabinoids in the body.

The Endocannabinoid System and Homeostasis

The ECS works to stabilize the internal balance of your pet’s body according to the signals received by the brain. Neurons are highly specialized cells in the brain. They communicate through the release of neurotransmitters. Neurons will only respond to communications if they have the specific receptor required to receive the neurotransmitter.

When a problem is detected, your pet’s body naturally releases endocannabinoids to interact with necessary receptors depending on the issue and restore balance.

CBD Interaction with Receptors in Your Pet’s Body

Unlike other cannabinoids, CBD does not interact directly with CB1 and CB2 receptors in your pet’s body. CBD has the ability to indirectly affect the endocannabinoid system by blocking enzymes that reduce natural cannabinoid molecules. Unlike THC, CBD does not have an intoxicating effect. This could be because of its lack of direct interaction with cannabinoid receptors.

Twenty years ago, a group of scientists at the National Institute of Health filed patent 6,630,507 stating that CBD has effective neuroprotectant and antioxidant properties that can "limit neurological damage" and health complications related to oxidation. The patent was approved in 2003. This means that the U.S. government has been recognizing and researching the benefits of CBD for decades. Continual research worldwide has shown that antioxidant and brain health properties of CBD could be related to a plethora of health benefits.

The Benefits of CBD for Pets

-Reduces pain and discomfort from age or injury

-Serves as a neuroprotectant

-May keep your pet calm in scary situations

Receptra Naturals CBD for Pets is a human-grade formulation using MCT oil for optimal bioavailability. Receptra carries two tinctures with the same formulation in different strengths for larger and smaller animals. CBD for pets can be administered directly or mixed in food or treats.