Curtis “Razor” Blaydes is a hardheaded, softspoken wrestler from Chicago, turned UFC fighter. A recent win placed him in the top five promotional Heavyweight rankings and he doesn’t plan on stopping there. Curtis Blaydes loves the fight life. That passion is helping him continue to gain momentum through some grueling battles as he sets his sights on the championship belt.

Blaydes competed as a wrestler in both high school and college, accumulating numerous accolades and establishing a strong base for his unexpected future in MMA.

Did you ever think this would be your life? 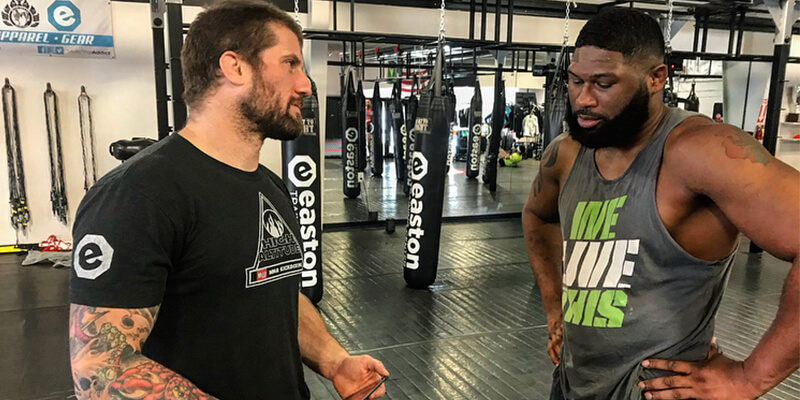 “No. Absolutely not. I thought I would be a history teacher. I messed up my grades a bit in college so it got a little tough. I could have still done it, but it would have taken a while. Really, I  just wanted to be a wrestler. I had an offer for Arizona State too, but I didn’t go that route.

I had a friend who said, “You should start boxing.” I put up resistance for a long time because I’m hard-headed. Once I got in there I wasn’t awful, so I kept at it and took my first amateur fight not long after, which I won.

I just wanted to be an athlete and wanted to continue this type of lifestyle. I wanted to keep hanging out with athletes and keep sweating out here with these guys (motions towards teammates).

How do you handle the mental pressure of being at the top of the food chain and all the expectations that are implied?

“I am a bit of a headcase. But I have Cody [Donovan] and he helps with the mental aspect. I need it. I don’t like confrontation. It takes a lot for me to go fight. I never fought after school or growing up. Even as a bouncer, I broke up fights but I never fought.”

Built on a frame that stands 6 feet and 4 inches tall and weighing 265 pounds, it may be hard to believe Curtis Blaydes is such a non-aggressive person outside the cage.

“Everyone has an inner animal. Most people would think I’m a gorilla or a bear, but I’m probably a beaver or something like that. Sparring is hard for me. Punches to the head cause brain damage. I don’t like hurting people by nature. I’m not going to f*ck someone up wrestling.”

What do you do in your free time when you aren’t training? “I play video games and watch Netflix. I like anything sci-fi - vampires, Lord of the Rings, Harry Potter . . . I’m a homebody. You see this (look of post-practice exhaustion). I’m not doing anything after this.”

What has been your biggest challenge so far in the sport?

“Time management. There are so many practices, and trying to weigh what is the most important can be difficult. I’m a big guy. I’m not doing 20 practices a week. It’s more like 15-16. I have to pick which is the focus for that day, week or camp. There are so many disciplines in this sport and you have to be good at all of them. I don’t even do that much wrestling.”

You are not originally from Denver. What inspired you to join Team Elevation?

“My friend Chepe and I moved here. I didn’t want him to be here alone. Then he moved back to Chicago. I stayed and it’s the best decision I’ve ever made. I don’t think my career would be the way it is without Team Elevation.”

Curtis Blaydes trains in Colorado’s mile-high city with Team Elevation, coached by UFC veterans Cody Donovan and Eliot Marshall along with Vinny Lopez, Sean Madden and a number of other high-level instructors. He also trains with Duane Ludwig at Bang for additional striking. Blaydes enjoys life in Colorado, not just because of his awesome teammates.

“The weather is much different than Chicago. It snows here but doesn’t stick like it does it does in Chicago and the wind isn’t horrible. There are no mosquitos either. I hate mosquitos. The altitude makes a big difference in training too.”

What is your favorite part of practice? 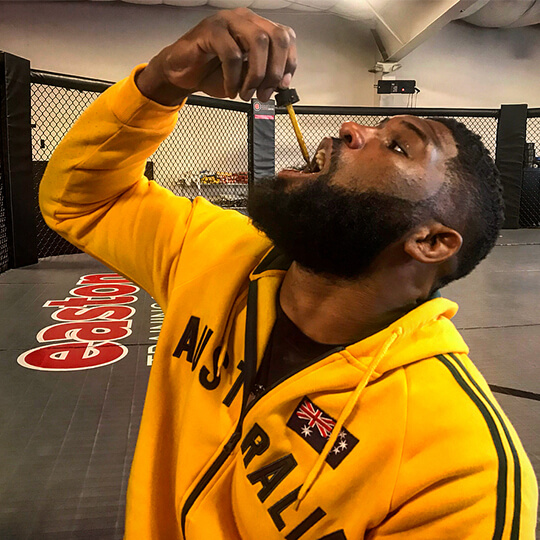 You are training with elite level athletes through grueling workout sessions. How do you recover from hard practices?

I use Receptra's Targeted Topical every day after practice. I put it on when I am hanging out playing video games, and I also take the Receptra CBD oil drops daily.

I also go in to Fit Performance Medicine in Denver for athletic recovery. They do cupping acupuncture, leg compression, massage and more. That place and Receptra CBD are the keys to my recovery. 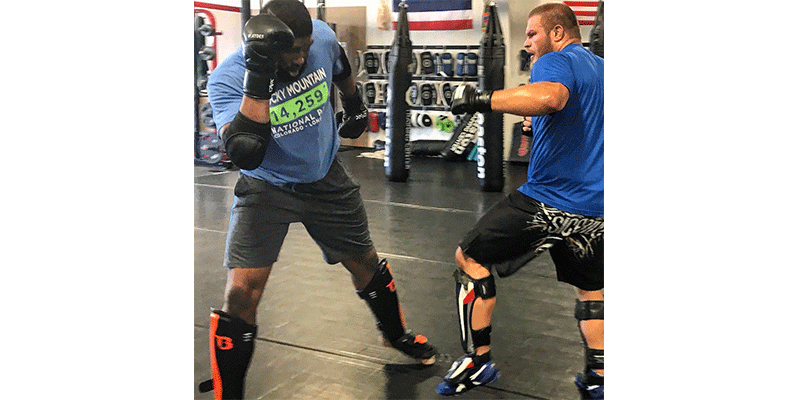 Did you ever get an answer to why you are not in the UFC video game?

The new EA Sports UFC 3 video game came out at the beginning the year. At the time, Curtis Blaydes was already in the top 10 for his division. For some reason, his likeness was not featured in the game. For an avid video game player, that’s a problem.

“I will not buy it or play it until I am in it. The UFC knows it. If I beat Alister [Overeem] there is no way that I shouldn’t be in it. It’s one of the greatest travesties of 2018.

What can we expect to see from Curtis Blaydes in 2018? “I expect to be higher in the ranking after this next fight and to follow that with a title shot.”

Curtis Blaydes entered the UFC in 2016 to take on a guy that the promotion had built up as an indestructible monster. Blaydes lost the fight via doctor stoppage between rounds. Frances Ngannou remains his only loss. Blaydes has stacked up a nice win streak since that first UFC bout and is currently in the top five for Heavyweights after a recent win over UFC legend Mark Hunt.

His next bout will be against Alistair Overeem in Blaydes' hometown of Chicago on June 9th.

“I feel confident. I feel more confident for this one than with Mark Hunt. He doesn’t have the one punch knockout power of Hunt. It's not that he doesn’t have power. He runs a lot and I expect to see him running from me.”