This is my experience trying CBD for Dogs:

There is not a whole lot I wouldn’t do for my mutt dog, Koa. He totally lives up to the phrase “Man’s best friend.” It seems like just yesterday he was peeing on the rug and tripping over his own two feet. Now he’s twelve and if he trips over his own two feet, it’s not because he still growing into them.

Leading into this little trial, it was getting harder and harder for Koa to get up from a seated position and he really tries to avoid stairs if he can. He is also pretty restless. It seems like he is always a little uncomfortable and he’s a lot thinner than I would like. He doesn’t eat as well as he used to and he has lost quite a bit of muscle tone.

Koa has always been the kind of dog that gets excited when there are other dogs outside the window, people at the door, mailmen outside or, when a storm rolls in. Other than annoying it hasn’t been a problem, but Koa’s anxiety has seemed to worsen.

Our veterinarian put Koa on some prescription NSAIDs for the joint issues years ago. He has to have his blood tested every six months to make sure the medication isn’t causing liver problems. He was running low on meds and I had some reservations about continued use. Last week my daughter brought over some CBD for Dogs. I have not really gotten into the cannabis craze, but she convinced me to give it a shot. Here is how it went.

Day One on CBD

I had no idea how much to give Koa, so I looked on the bottle and found the serving size by weight. At 52 pounds, Koa needed a full dropper. Easy enough. I shook the bottle, pulled up the dropper and while he was laying at my feet I stuck the dropper in the side of his mouth. He had a very confused look on his little face, but I know it got in. Then I waited and honestly, nothing happened.

I promised my daughter that I wouldn’t give up on it for a full week. The next morning I did it again. Koa isn’t too stoked on the idea of a dropper in his face, but he still took it. I hadn’t really taken the time to read the ingredients or smell it. Receptra Pet CBD just contains hemp extract (CBD) and MCT oil. The only thing I noticed on day two was that Koa finished his food. I had no idea if that was related to the CBD. 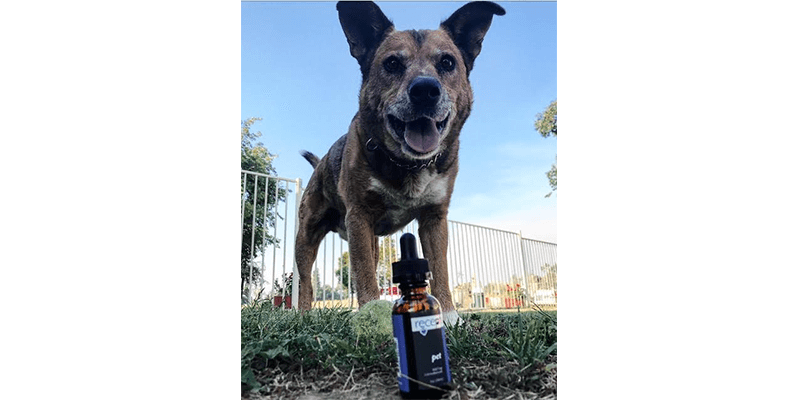 Koa saw me coming this time and it was a little tougher to get the dropper close enough to make it in his mouth with him wiggling his head but it happened. I heard of MCT oil for people but I didn’t know if it would have similar effects on dogs. I did a little Googling and found out that MCT oil can help skin and coat and even has some flea preventative properties. Koa ate all his food again on day three.

This time Koa was really not about the dropper, but he actually got up. And he got up fairly quickly. I actually had to work a little to get him to stay still. I kinda missed his face and I wasn’t sure how much I got in, so I gave him another half a dropper. He has never been good about taking his NSAIDs when I hide them in his treats. There has to be a good way to do that with this stuff. I looked it up and found a CBD dog treat recipe using peanut butter that would keep fresh for a while. Surprisingly Koa was up and about a lot more on day four.

I made the treats the night before so they would be ready for the morning. Koa had been moving around so much better the day before, that I decided to use the equivalent of 1 ½ droppers in each treat. Koa ate that without hesitation. We went for a walk for the first time in a while. Koa was a little slow at the beginning and the end, but he seemed to have a much easier time going up and down curbs. He was also noticeably calmer when passing other dogs. He was fine when we got home but seemed extra restless when he was trying to sleep. I didn’t want to give him more CBD until I knew if that would be safe.

Koa took his morning treat and seemed in pretty good spirits. He had been eating well every day and was noticeably more active. I looked up the side effects of CBD for dogs. Surprisingly, there wasn’t much to see. I did find a report from the World Health Organization that stated CBD was safe for humans and animals, non-addictive and had no adverse side effects. I did find that if given a lot, a pet may be a more tired than usual. Koa really wanted to go on a walk again, but I was hesitant because I didn’t want him to be sore. I made him wait a day.

Since we held off on yesterday’s walk I figured today would be fine. Koa took his CBD treat and we headed out. He walked pretty well for an old guy and we went just a block farther than we did previously. The rest of the day went normally, but I was nervous that he was going to get sore. So, I stuck the dropper in his face again and gave him another half of a dropper, which means he got two droppers that day. Koa slept like a rock! I even got up once to make sure he was ok. He was snoring soundly.

I only made enough treats for a couple days, so it was time for a new batch. I decided to see how it would work if each treat just had a dropper and I gave him one in the morning and one at night. Koe received his morning serving of CBD in a treat. Again, he did great on our walk. He even pulled a little when he saw a squirrel go by. It caught me off guard because his pull is normally not very strong. It had been over a week and Koa had eaten all his food every day. He looked like he was putting on a little healthy weight. I gave him the second treat before bed and he slept great.

Koa took his treat as usual. This time on his walk we took a different route. I knew my daughter was there and I thought we might be able to catch her and say hello since it isn’t far from the house. My daughter shouted over to us from the library stairs. Koa saw her and pulled so quickly that his leash came loose. He took off up the steps to meet her. My daughter kneeled down to pet Koa and looked up at me with complete bewilderment. I told her that I was seeing results with the Receptra CBD for dogs, but she was not expecting that! 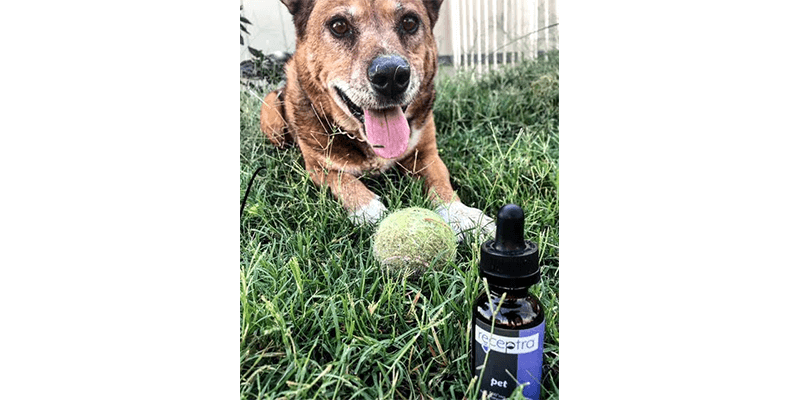 Koa plays fetch. Enough said. I am now a firm believer in CBD for Dogs. I no longer have to worry about Koa’s liver on pain medication and he acts like he is years younger. Every once in a while on really rough days we have to give Koa a pill. But I guess that is the same for humans with joint pain. Some days are worse than others. Receptra Pet CBD for dogs and other animals has completely changed my outlook on cannabis and quality of life for my best friend.